Good morrow, fellow Downtowners!  I've never posted before but I'm eager to share a humble review of Sam Humphries’ comic, Sacrifice. (I could say “graphic novel”, but let’s call it what it is and be excited about it!).  In addition to being brief it’s also spoiler free, so read on, little doggies. 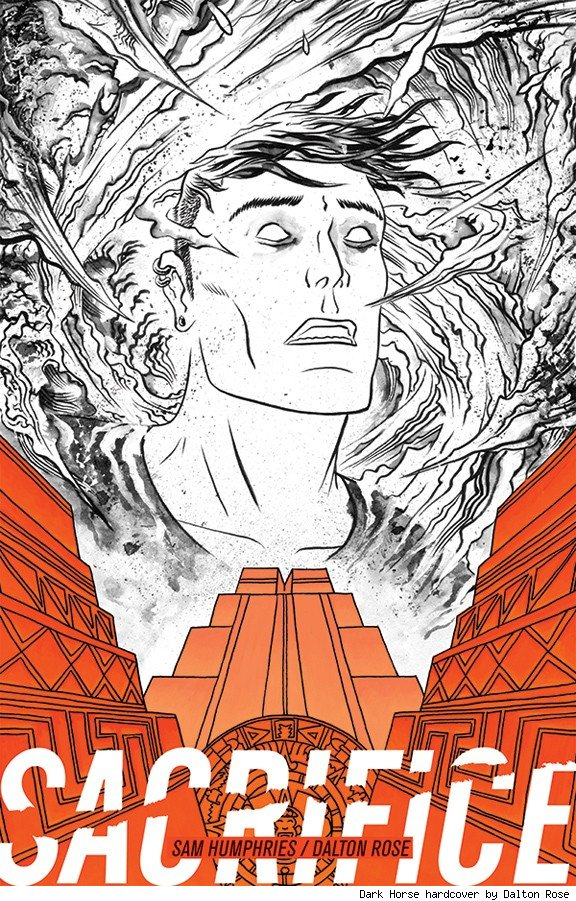 On the surface Sacrifice is about a young man named Hector and his struggle with epilepsy and depression.  It’s also a time-travel story about history, identity, ancient gods and of course, the cultural destruction of the Aztecs in Mexico.  The journey that Hector takes in Sacrifice from present day Mexico to the time and place of the waning Aztec empire is beautifully told, drawn and colored; Dalton Rose’s art is more vibrant and colorful than I was prepared for, and it really was a pleasant surprise.  Rose drew the characters in Sacrifice  with as many clues to their identity in their dress as Humphries put into their thoughts and actions.  Hector and company are layered and present themselves well without baring their souls outright.  They are real.  And complex.  Hector’s pain and confusion in Sacrifice are like that of so many teens and twenty-somethings on the path to genuine adulthood--only his is magnified by a life of extreme social anxiety and seizures.  His journey to the past and his acclamation to a life there is fraught with cultural walls, ostracism and sometimes painful self discovery.  The decisions he makes not only affect his new, or rather old, life in the past but reach across the entire Aztec empire as they face the loss of their culture and their very lives.

As gorgeous as this story is to read and to soak up with your eyes, it’s real beauty is in its almost autobiographical nature.  Sam Humphries, the creator  of Sacrifice (and originally, self-publisher) is epileptic himself, and with this story has attributed a sense of mystery and a search for meaning to his own struggle with the disorder.  It also addresses his own cultural identity and the ties he feels to his ancestors.  His picture of the Aztec people in Sacrifice is not one so violent as many popular culture sources have painted;  these people were as human, empathetic and discerning as anyone else, today or yesterday, and Humphries makes that clear.

You need to be a member of Downtown Comics to add comments!